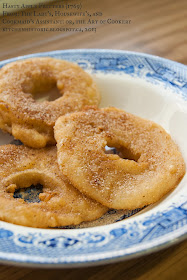 Apple fritters are one of those amazing foods which have been around for ages. Fritter-type foods can be traced back all the way to the Romans, who introduced the recipe to Europe as their influence and power spread. This precursor of the fritter (and doughnuts as well) was called scriblita and was created by frying dough in hot fat. Cryspeys, a medieval rendition, were served with sugar sprinkled on top. A fritter refers to essentially anything coated in dough and fried, but apple fritters have long been a favourite. In medieval times, fritters were considered dangerous to consume and indigestible, but they remained on the menu, often as part of the last course of a meal. However, because of their supposed dangerous nature, it was recommended to eat fritter only while hot.

Early varieties of apples in the U.K. around the time this cookbook was published include the Pippin (Ribston or Sturmer), Blenheim Orange, Bramley, and Ashmead's Kernel. These varieties were first cultivated between the late 1700s and early 1800s. I don't have access to any of these in my grocery store. Its also a bit of the wrong season for apples (bad me!), so I just used McIntosh apples as a substitute. 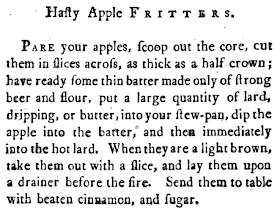 So I couldn't figure out how wide a half crown piece is. If anyone knows, please share!
Anyway, we're talking about a coin here, so I just sliced my apples fairly thin.
For the batter, I used approximately equal parts flour to beer.
Now, I'm only giving this recipe two stars, but I think that part of that is my fault. Firstly, I used butter for frying. Secondly, I the butter was salted.
I also had a hell of a time trying to core the apples. I don't own an apple corer, but now I see the use of such a device. The McIntoshes I used were really small too, so that didn't help.
Next I added 2 cups of butter to a pot, figuring that counted as "a large quantity." Yeah, well, then I discovered that basically boiling the fritters in butter didn't turn out well. For your viewing, on the left are the apples fried in a small quantity of butter and on the right are the ones that were completely submerged in butter: 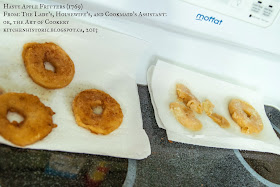 So I finally figured that out, and then my butter burned and I had none left. That was the end of the apple fritters. In the end I only got 3 edible ones.

How were they? Well the batter was very chewy, stretchy, and soft. Some of the apples were almost mushy, so they cook VERY quickly. Also, the salted butter made them sooooo salty. Big mistake. As for the beer, there was no taste of it at all. I think that if I used oil (or even unsalted butter, but being careful not to burn it and only using a small amount) these would be alright. The batter isn't great, but I guess its okay for being "hasty."

(Adapted from The Lady's, Housewife's, and Cookmaid's Assistant: or, the Art of Cookery)

1. Peel the apples and remove the core, leaving the apple intact. Slice into rings. Meanwhile, heat your fat for frying.
2. Make the batter out of flour and beer. It should be thin.
3. Dip the apple rings into the batter and let any excess drip off a bit. Immediately fry until they are light brown. Let the fried apples drain on paper towels or over a rack.
4. Serve hot with cinnamon sugar sprinkled over the top. 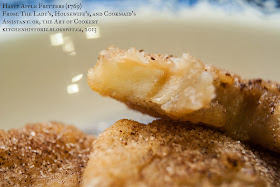